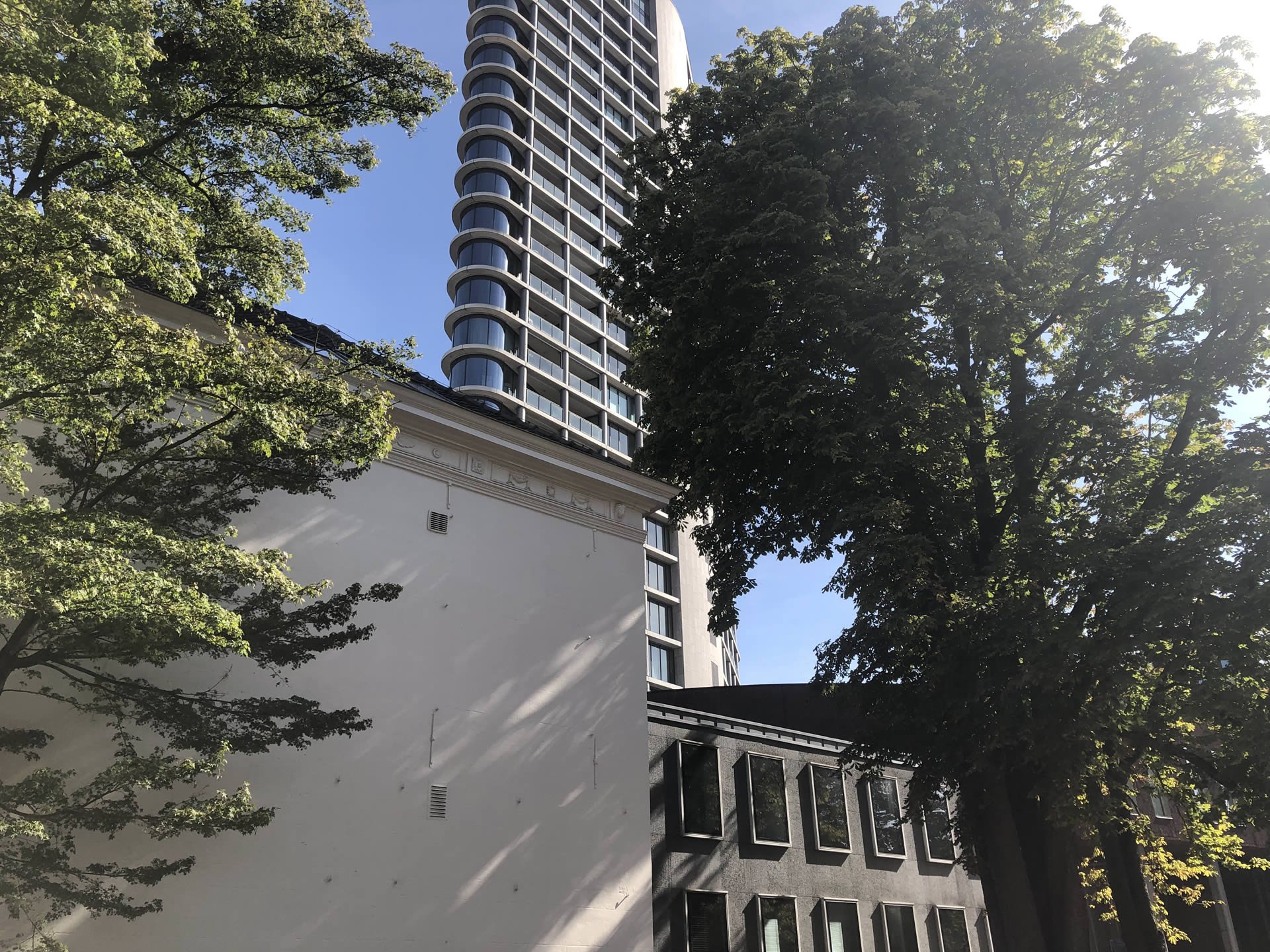 Smalle Haven is an urban area development plan in the center of Eindhoven. The plan was designed by Jo Coenen and consists of a new square, a new park and 8 buildings, most of them designed by a different architect. Coenen has lived in Eindhoven for 14 years in the past and during at least 7 of those he had been working on the idea of how he would redevelop the inner city. So the story goes that when he was asked to make an urban plan for the Smalle Haven area, he drew it in one go on a Saturday afternoon. This sketch was already so complete that nothing changed and it was therefore executed excactly the way he drew it one Saturday afternoon. The plan consists of the following parts:

The first part of the plan is the Medina complex, built on a site within the medieval city limits of the city of Eindhoven between the filled-in city canals. The name ‘Medina’ is therefore vere appropraitely chosen. Medina is Arabic means (old) ‘city’. The Medina is often the oldest part of old North African cities, usually falling within the city walls. In the Medina, the houses have been built on top of each other over the centuries. That part can also be seen in Eindhoven, as the building slopes down to the Het College from the tall, 7 story side on the Vestdijk. The slope is filled with residential terraces and greenery, giving it that Mediterranean look. The internationally renowned English architect Neave Brown, in collaboration with Rob van Aken of Eindhoven’s Van Aken Architecture and Urban Planning, was responsible for the design of the Medina complex. The planting has also made it more attractive for animals. The design takes into account, among other things, nectar and host plants for butterflies and hiding and nesting places for birds. The experience of nature in the city has certainly increased as a result.

Part two of the plan is the Caverna complex, located on the south side of the Smalle Haven area. It consists of five studio houses, eight apartments and two commercial spaces. The apartments with living room, kitchen and bedrooms are grouped around a spacious patio, this is reminiscent of  cavern or hollow, hence the name Caverna. It was designed by architect Hans Widdershoven of Van Aken Architecture and Urban Planning.

Part three of the plan is the Mercado complex, the new building of the Work, Care and Income department of the municipality of Eindhoven. On the outside, the building connects tot he diversity of the urban plan and links the various components in both image and form. A ‘city room’, a partly covered square, forms the heart and serves as a porch for the entrance. The adjacent arcade strings all adjecent buildings together. Altough the building is not experienced as a totality outside, that is the case inside. The open office concept is expressed here; a then new concept that focuses on transparency and flexibility. The interior is designed around voids. These help with orientation and connect floors and departments. The Mercado complex was designed by female architect Jeanne Dekkers.

Part four of Coenen’s Smalle Haven plan provided for a new square, the Catharinaplein. He thus created a new space in the city center and more space for the Catharinakerk. The southern wall of the square had tob e redesigned due to the demolition of smalle scale buildings, including the De Halve Maen building from 1486. The Belgian architect Charles Vandenhove designed the new building, called Catharinahuis, in red concrete. In this building, the classical arrangement of plinth, vertically oriented facade and a cornice is reflected in stylized form.

Part five of the plan is the cultural youth center Dynamo, which offers young people practical help with education, housing, money matters and work. In addition, Dynamo keeps loiterers off the street with a sports hall, a fitness room and a pop hall for 550 visitors. Architects Bert Dirrix and Roland Laurey gave Dynamo a building that fits in with a youth center. The raw facade consists of panels of pigmented concrete that bear visible traces of wooden formwork. The brown skin of the building forms a warm contrast with the different shades of red in the atrium. The open square surrounds the spacious void around which the functions are grouped. There are public areas on every floor so that there is life everywhere in the building. In order to involve the young people in the street, the building has a large window. During the day the “urban window” reflects the Catharinakerk opposite, in the evening it showcases the activities that take place inside.

Part six of the plan is the ‘Schilgebouw’ (shell building). It consists of 42 apartments/studios and various shops. It was designed by Jo Coenen Architects & Urbanists and was realized tos hield off the busy Stratumseind pub street. However, the historic buildings can still be experienced in the tea garden at the rear, created by cutting a “bite” out of the building. Here, too, the residential program is exposed through the corridor on the second floor with its stairs going down and up. At the front, an arcade is created fort the “food street” under the balconies supported by elegant concrete columns. The building houses the Down Town Gourmet Market with 21 independent eateries.

Part seven of the plan is an office complex that has been realized between the historic buildings on the Ten Hagestraat, the Vestedatoren with Collonade and the Karel Vermeerenplantsoen.

Part eight of the plan is the Vestedatoren. It was designed by Jo Coenen himself and his cousin, Geert Coenen. The Vestedatoren is renowned for its special architecture and is the absolute crown jewel of the Smalle Haven plan. When approaching Eindhoven’s center, this tall and narrow tower announces the heart of the city like a beacon. That’s why it is at its narrowest when seen from this angle. To make the building as slim and elegant as possible, its basic form is a slender diamond with rounded corners. The building has 27 floors and a height of 90 meters. Each floor has two apartments, and the base accommodates a double-height commercial unit. The building is reminiscent of the Flatiron Building in New York City, both in height and shape. An essential difference, however, it that the Vestedatoren has a diamond shape and the Flatiorn building a triangle. The Vestedatoren was awarded Building of the Year in 2007 by the Dutch Architectural Industry Association. Accompanying the Vestedatoren is the Collonade, which wraps around the Karel Vermeerenplantsoen.

In the heart of the plan lies an intimate city park called the Karel Vermeerenplantsoen. Karel Vermeeren was a painter, drawer and poet born and raised in Eindhoven. He lived from 1912 tot 1998. The park was named after him in 2009. Since July 4, 2010, his bust, made by Peter Nagelkerke, has also been placed there.